I recently came across a book reviewing competition run by Distinctive Chesterfields to win a gorgeous armchair and £100 of book tokens. You can find out more about this competition here.

When I first read Gatsby I wrote a blog post of my first impressions of the book on my other blog but, I have to say, my opinions of the book are now very different. I definitely think that this is one of those books which you have to read more than once to appreciate as is doesn't describe everything in great detail so it can be a bit jumpy so if you re-read it you can just appreciate everything better rather than just struggling to decipher the storyline.

The book is set in the 1920s and is told through the eyes of Nick Carraway who, I believe, is an absolute wallflower and is always around but doesn't really do a great deal nor play a big role in the plot. He tells the story of what happened during the summer of when he moves to a small house beside the mansion of the allusive and mysterious billionaire Gatsby who the story is mostly based around. The story takes place in Gatsby's mansion, where he holds huge parties, New York and in a few of the other character's houses. It shows the development of Gatsby's relationship with Nick and the other characters as Gatsby tries to delve into the past to rediscover something that he once lost. This story deals a lot in themes of illusion and reality but also with the past and whether we can relive the past.

When I first read this I didn't love it as the characters aren't ones which I immediately were drawn to and I felt the atmosphere seemed rather superficial. However, as I am studying this for English Lit, I have found these points which previously deterred me to be points which draw me in now. I love how nothing is as it seems and Fitzgerald plays around with ideas about illusion and identity and I feel like the novel is arguing that no-one is as they seem and everyone lives within this image of themselves and always aspires to be true to this image but as it is merely an image it can't really be achieved as it is based purely upon the character's imagination. Moreover the narrator is often described as 'unreliable' but I think that Nick is a more reliable narrator than one who would see and know everything as he is realistic. Nick seems to be the one voice within this fairly land of illusion who is true to himself and that makes him totally unreliable to convey events without partiality. At points he argues that he is likes Gatsby and at other times he says he feel disdain for him. Yet Nick changes and is versatile in his opinions and thus doesn't stay faithful to one idea of himself thus making him able to adapt yet not able to convey events impartially.
I also enjoy reading this book from a feminist perspective as it is really interesting how the role of women is conveyed within a time when women were said to have more freedom. Through the character of Jordan who is quite masculine it is suggested that, even in the 20s, for women to progress they had to make themselves more masculine (think Lady Macbeth in a flapper dress). Moreover the hate that people have for Daisy, I think, is based upon our patriarchal mindset. Daisy and Gatsby are very similar but Daisy is demonised because she cannot live up to the image Gatsby has of her yet Daisy also has an image that Gatsby falls short of. As the story is told through Nick's eyes, which have particular partiality for Gatsby, Daisy is put forward as the victimiser in a situation where she could never win - how could she live up to Gatsby's ideal? Moreover Nick sees her, and the majority of the women, in a quite objectified manner. His description of Daisy's voice and his constant reference to the sound of it makes it more like a noise rather than a conveyance of speech thus isolating her further.

Ultimately this book is really interesting and can be analysed so deeply (I could probably go on in the manner as I did above for ages). I love this different image of the 20s and the beauty of Fitzgerald's writing is breathtaking and I believe it to be unparalleled in literature.

I hope you enjoyed this post and I aplogise for not having posted for so long.
I would love to hear your opinions of the book! 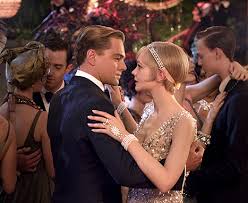 If you have any questions, tips, PR related inquiries or just want a bit of a chit-chat please email me at theemeralddove21@gmail.com